Hiratsuka City is on the central part of the Kanagawa Prefecture, and Sagami Bay. Hiratsuka is developed along Sagami River on the southern part of Sagami plains since 7,000 years ago. Tanzawa and Oyama stand on north, Mt. Fuji and Hakone lay on the west, citizens could see them every day.

Hiratsuka was flourished as a post town on Tokaido in Edo era. In 1887, the railroad currently called Tokaido Line was constructed then Hiratsuka Station was opened. From that, the area around the station has developed and Hiratsuka was municipalized as the fourth city in Kanagawa prefecture in April 1st 1907, and also it started to develop as the commercial and industrial city next to Yokohama, Kawasaki, Yokosuka.

From pre-historic years, about 7,000 years ago people started to settled in Hiratsuka area, so they loved its mild climates. Late 4th century, Otsukayama Kofun tumulus Tsukakoshi Kofun tumulus etc., was built, and some precious remains were found.

From late 9th to 10th century, Masako Taira the sister of Prince Takamochi and the daughter of Prince Takami, the grandson of the Emperor Kanmu was passed at this area, and the mound for her tomb was built and it was weathered and flattened, so the area around the mound was called Hira (Flat) Tsuka (Mound) in Japanese. It also shows the area was controlled by Nakamura clan and Miura clan, the family of Prince Takamochi and they dominated the area until Sengoku period, so Soun Hojo, the founder of Go-Hojo clan, occupied Okazakijo Castle in Hiratsuka in 1512. In 1590, Hideyoshi Toyotomi who was the was the Kanpaku Dajo-daijin (the supreme minister and chancellor) won the Siege of Odawara, the Hojo Clan ruined, and Ieyasu Tokugawa moved to Kanto, and he ruled the region at Edo Castle. Since Ieyasu Tokugawa held the power to control Japan and founded the Edo Bakufu (the Edo Shogunate) at Edo (Tokyo) in 1603, the most parts of Kanagawa Prefecture were directly controlled by Edo Bakufu (the Tokugawa Clan), and rest of it belonged to the small lords who had hired by the Bakufu directly, because Kanagawa was very important area to keep the Edo Bakufu stably in the Edo Period.

Hiratsuka city and citizens suffered the great damage during World War II, but the citizens worked hard to rebuild the city. Now its population is over 250,000. Besides, the Hiratsuka was famous for the Shonan Hiratsuka Tanabata Festiva, every year about 3 million people visit Hiratsuka to enjoy the festival. 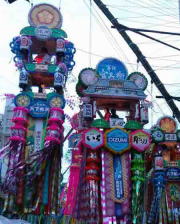