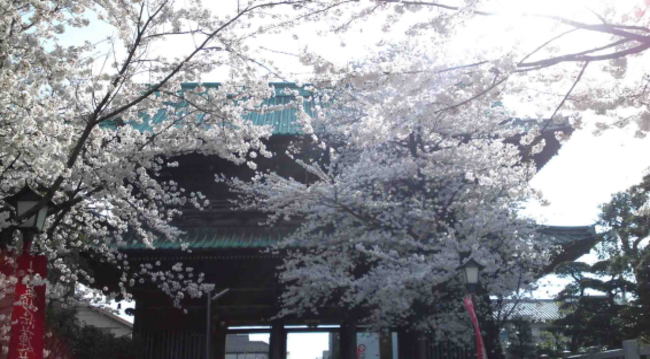 The Grand Head Temple of Nichiren Sect, Hokekyo-ji was started in Kamakura period in the Middle Ages of 13th century, with many legends of the founder Nichren.

Nakayama was his peaceful place when Nichren involved in some troubles with the Government at Kamakura, and also Nichren preached at. The Kishibojin-do which dedicates the stutue of Kishibojin (the goddess of taking care of children) carved by Nichiren himself is worshipped very popular and is called as one of Edo Three Grand Kishibojin. Thousands of people visit and bless of safe delivery of a baby, healthy child rearing, curing disease, and rising prosperity of a company's fate.

Nakayama Hokekyo-ji Temple is the central training center of the incantations of Nichiren Sect. From November 1st to February 10th, it holds the 100 days severe practice in cold weather every year. It is known one of the severest religious practice in Japan.

Hokekyouji-Temple preserves the national treasures, they are very important historical properties on the Buddhism in Japan. They are the two masterpieces, 'Rissho-ankoku-ron' and 'Kanjin-honzon-sho' written by the founder Nichiren himself. And the four architectures, the Goju-no-to (the five-story pagoda)built in Edo period, the Hokke-do hall built in Kamakura period, the Soshi-do hall and the Yon-soku-mon gate built in Muromachi period are designated by the National Government as the important cultural properties. There are many other cultural properties like the framed-calligraphies by Koetsu Honami, the biggest Daibutsu in Chiba prefecture and so on.

There are some events held in Hokekyo-ji Temple. In Spring, the cherry blossomes blooming there look excitingly beautiful.

In addition, visitors enjoy walikng in the site of Hokekyoji Temple without any charges. It is a very clever choice to visit this temple as your final stop before leaving Japan because it is on your way to Narita International Airport from Tokyo or throughout Japan. 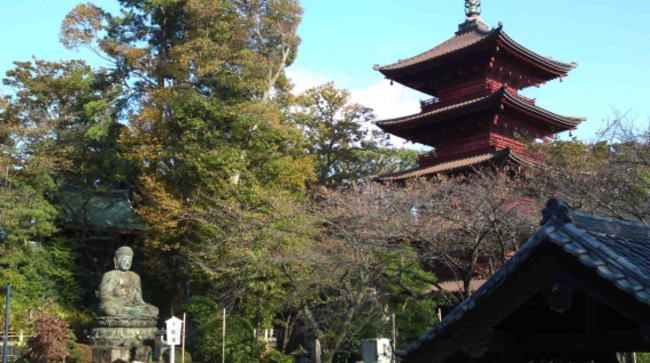 The Annual Events In Hokekyo-ji Temple

8,18,28 on every month
The festival day of Kishibojin (the goddess of kids)


18 on every month
Monthly sermon

Jan 8th,18th,28th
the grand festival for taking care of children

Feb 10th
Dai-aragyo-mangyoe, the celebration for the priests having accomplished the 100 days severe practice
the vernal equinox day
Higan-no-Segaki-e, the letters means hungry ghosts' feeding ritesthe in vernal equinox, it is a title of a Buddhist mass.
April 8th
The Flower Festival of Buddha's birthday

April 15th-20th
Senbu-ka: the event the buddhism priests read 1000 scripts together for bless is called.
May 8th,18th,28th
The grand festival for taking care of children


the autumnal equinox day
Higan-no-Segaki-e, the letters means hungry ghosts' feeding ritesthe in auturmnal equinox, it is a title of a Buddhist mass.
October 1st
The Grand Festival of Hachidai-ryuo (the grand festival of the eight great dragon gods)
November 1st
Dai-aragyo-nyugyou-e, the celebration for the priests the begining of the 100 days severe practice
The Cock Days in Nov
Myoken-sonsei-taisai, the festival of blessing to the north star on the Cock Days in November

Other Events And Best Season For Each Flowers In Hokekyo-ji

Febraury
Plam Blossoms
March 3rd
Hina-matsuri, the girls day or the dolls day
from the end of March
Cherry Blossoms


from the end of May
JapaneseHydrangeas


from the end of Sept
Red Spider Lilies, Fragrant Olives And Other Flowers In Fall


from the end of Oct
the autumn leaves（cherry trees、ginkgo trees, maple trees, etc）

The Setsubun AS The Star Festival / The Bean Throwing Festival

The Setsubun as it called the Star Festival at Nakayama Hokekyo-ji Temple is very unique, so the people throwing beans are Toshi-otoko, Thoshi-onna, the guests of celebrities, the priests working at and the preiests practicing the 100 days asceticism in cold season, so the events might give people much happiness. 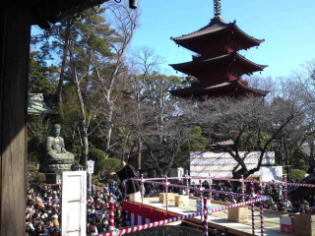 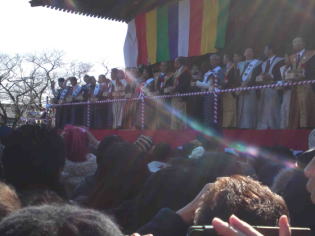 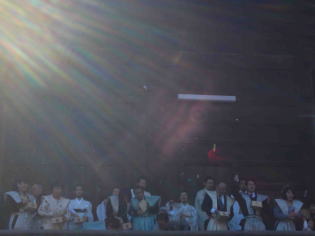 There are some plum trees on a small hill behind Soshi-do, the plum blossoms are blooming around Hokke-do, Ugajin-do and Yonsoku-mon. The blossoms on the drooping plum trees are very beautiful on their pale pink petals. 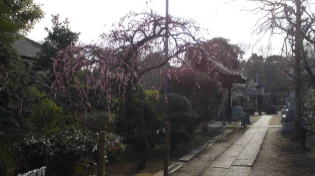 Hinamatsuri, the girls festival or the doll festival

There are many Hina-dolls displayed on the corridor connecting the main building and Kishibojin-do. 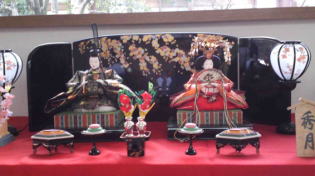 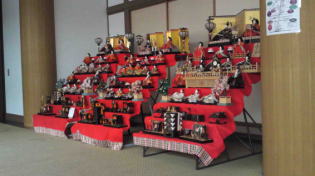 The Cherry Blossoms In Hokekyo-ji 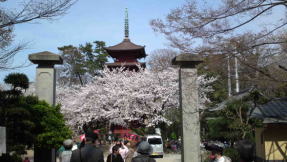 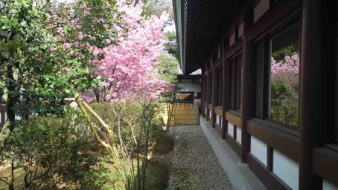 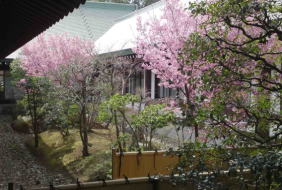 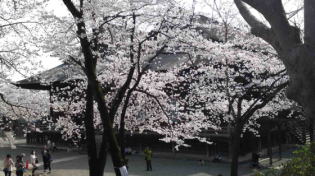 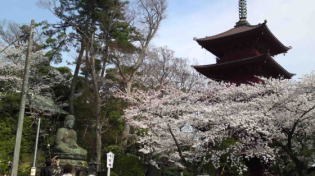 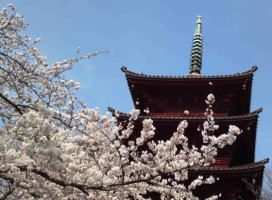 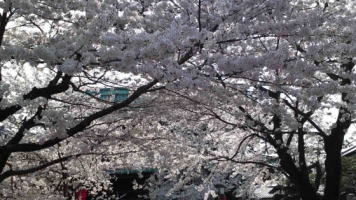 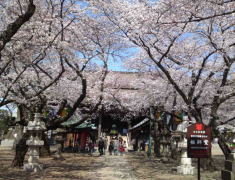 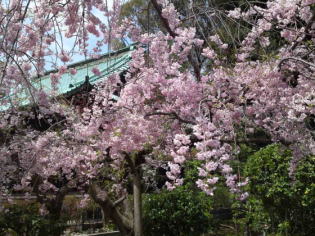 There are several kinds of flowers blooming in Hokekyo-ji Temple, so many people enjoy taking a walk and viewing the trees and flowers in the temple every seasons.After blooming cherry blossoms, satukis and azaleas start blooming, beside the statue of Nichijo the first chief abbot, a wistaria-trellis stands, and some penies blooms around them. The satukis and azaleas are blooming excitingly beautifully along the ston steps to Ugajin-so. 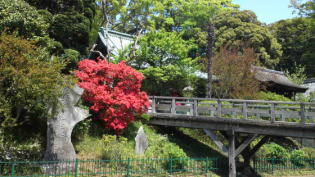 Ryuoike, named the dragon king's pond had rebuilt about ten yeas ago, now some Japanese hydrangeas bloom on the edg of the pond.

Ryuoike, the drangon king pond where Hachidai-ryuo-do stands in has hundreds of lotus flowers blooming from mid-July to mid-August. They blow some cool winds to make refresh. 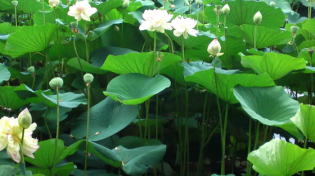 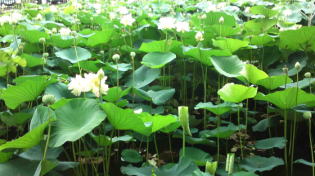 Red Spider Lilies, Fragrant Olives And Other Flowers In Fall

Some autumn flowers bloom quietly in Hokekyo-ji in fall. Red spider lilies bloom under Nio-mon gate and the stone steps to Setsu-do. Winds carried sweet smell of fragrant olives around Ugajin-do. There are some jars where water lilies float. 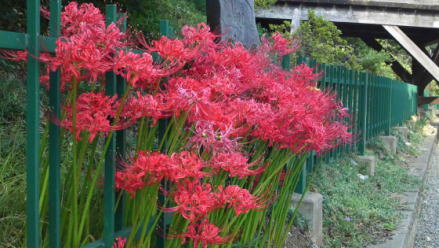 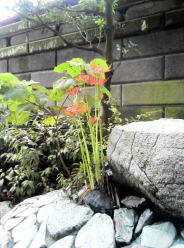 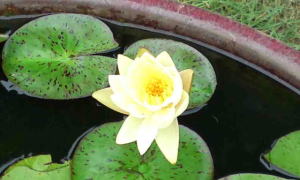 In fall, the cherry leaves turning crimson is the beginning, then ginkgo trees change flash yellow figures, and crimson maple leaves decolate the views in Hokekyo-ji. 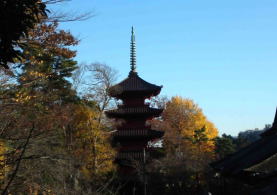 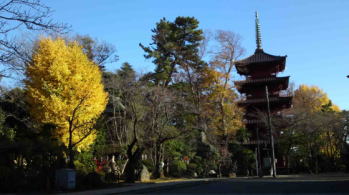 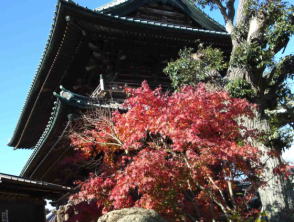 Every year from November 1st to February 10th, the 100 days asceticism in cold season is held in The Grand Head Temple of Nichiren Sect, Shochuzan Hokekyo-ji Temple at Ichkawa city, Chiba prefecture. This asceticism is very famous, it was said one of the hardest asceticism in Japan.

Every year over hundreds of priests gather and practice for 100 days in the cold winter season, it is really very hard and austere discipline.

Neither all priests belonging to Nichiren Sect can enter the discipline, the priests past the rule could only attend the practice. For example, the priests should be healthy. Those priests succeed the skill by word of mouth. It is very hard discipline to learn how to practice healing.

The schedule in a day of the priests practicing the asceticism starts 2:00 am. Then they throw cold water on their own bodies seven times in a day from 3:00 am to 10:00 pm to purify themselves, this is called 'Suigyo'. And they read thousands of Sutras, write the succeeded important Sutras and learn 'Mokken-sosho' a important skill in Nichren Sect. They could eat a cup of plain rice porridge and a pickled plum twice a day.

After that, these priests go back to their temples and help their supporters and followers to their wishes fulfillments with the skills and knowledge they learned in the grand asceticism.

Nakayama-Tori-no-Ichi (The Cock Fair at Nakayama Hokekyo-ji Temple) is held at the Myoken-do next to the Soshi-do in Myouken-Sonsei-Taisai-no-hi, in other words, every Tori-no-hi (The Cock Day) in November. In the Myoken-do, Hokushin-Myoken-Sonsei is dedicated, he is the god of peace in the land, avoiding troubles and helping to get good fortune is introduced by the Chiba Clan one of the powerful family having succeeded the Military Governor of Shimousa (the northern part of Chiba prefectuer) in middle ages.

According to Myoken-Hongu-Chiba-jinja Shrine Engi (the history of the shrine), Myoken had believed faithfully by the Chiba Clan from generation to generation. When the Founder Nichiren visited the Chiba-jinja Shrine and took an oath of developing and flourishing his religious sect, he got an auspicious augury, so he raised his voice in admiration and said 'The Myoken-Son is very the thing that the god protects my sect.' After his wish had been fulfilled, he dedicated the Lotus Sutra with thin letters written by him.

The Washi-Myoken dedicated at The Washi-jinja Shrine and Chokoku-ji Temple came from Hokushin-Myoken, the enshrine deity at the Chiba-jinja Shrine. And alos Yamatotakeru-no-mikoto dedicated at Aidono who became a swan and flew to Hokuten or Myoken's (the northen heaven) in myth. Therefore poeple think that their wishes get to them in Tori-no-hi.

According to Chokoku-ji Temple in Asakusa Tokyo, Myojo (Venus) started to travel and Washi-Myoken-Daibosatsu appeared, the Founder Nichiren had prayed for the peace of the country at Kobayakawa's residnt (there stands Shuzan-ji Temple) in Washizu, Kazusa-no-kuni (Mobara city, Chiba prefecture). The day is the Cock Day in November

If you want to know more about Nakayama Hokekyoji Temple, please see the site 'A Walk in Nakayama Shimousa'.

The Antique Market In Hokekyo-ji

The antique market is held in Hokekyo-ji every year in mid-November. 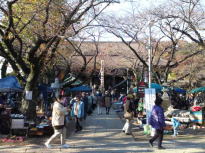 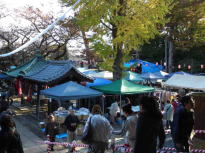 IIchikawa City has very long history and there are a lot of historical assets in the city. Moreover it is very close to the center of Tokyo and Narita International Airport, tourists could easily feel and touch Japanese culture. Why don't you visit Ichikawa City?